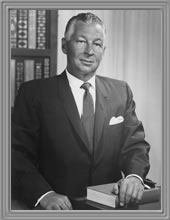 During the 1966-1967 presidency of W.O. Shafer, the State Bar of Texas won the Award of Merit, the highest award given by the A.B.A. to any State Bar Association. The award was given "for outstanding public service and professional activities." Shafer undertook an extensive and comprehensive survey into the economic status of Texas lawyers. Three important legal publications appeared during his term: "An Introduction to the Efficient Practice of Law," "Texas Probate," and "Texas Lawyers Practice Guide."

W.O. Shafer was born in Nolan County, Texas to William Oscar, Sr., and Nancy E.B. Shafer. He attended Ranger Junior College in 1934-1936 and then went directly to the law school of Cumberland University in Lebanon, Tennessee, where in 1937 he received an LL.B. degree which was later changed to a J.D. degree. As a law student, he was a member of the Blue Key National Honor Society. Shafer married Mary Frances Crutsinger in 1937. Following his admission to the Bar in 1939, Shafer began to practice law in Odessa. He served as a justice of the peace in 1941-1944, as Ector County attorney in 1945-1950, and as district attorney for Ector and Midland Counties in 1951-1952.

Before becoming President of the State Bar, Shafer was a director (1960-1963), chairman of the board (1962-1963), and vice-president (1964-1965). He served as president of the Ector County Bar and as a director of the A.B.A. in 1967-1971. He is a Fellow of the Texas Bar Foundation, American Bar Foundation, American College of Trial Lawyers, and International Academy of Trial Lawyers. He was a trustee of the Texas Tech Bar Foundation, a director of the First National Bank of Odessa, and a member of the Defense Research Institute. Shafer, who won several distinguished-citizen service awards, was a member of the Church of Christ, Democratic Party, and Masonic Lodge. He is a past Exalted Ruler of the B.P.O. Elks. Shafer died on April 19, 1992.