The Texas Bar Journal takes a look at the lives and careers of attorneys in the less-populated areas of the Lone Star State and examines the opportunities that these places offer the under- and unemployed. Materials come from a new blog series by TBJ as well as recent and old articles in the Texas Bar Journal. 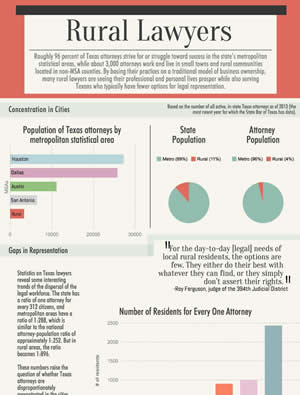 Opportunities for Rural Pro Bono and Legal Aid
Texas Bar Blog, July 2, 2015
Legal groups across Texas have created innovative ways for lawyers to help fill the access to justice gap in rural areas. Here are a few examples of some of the programs available. To suggest a rural-focused initiative not featured on this list, email lindsay.mader@texasbar.com.

Statistics on Texas lawyers reveal some interesting trends of the dispersal of the legal workforce. The state has a ratio of one attorney for every 312 citizens, and metropolitan areas have a ratio of 1:288, which is similar to the national attorney-population ratio of 1:252. But in rural areas, the ratio becomes 1:896. As of 2013—the most recent year for which the State Bar has data—83 percent of all active, in-state attorneys were located in the four largest metropolises (the Houston, Dallas-Fort Worth, Austin, and San Antonio metropolitan statistical areas). The State Bar of Texas, as well as bar associations and state legislatures in largely rural states, are addressing the needs of these communities through creating special projects, loan repayment programs, and supporting rural pro bono and legal aid.

Roy B. Ferguson and his attorney wife, Pene, moved almost 600 miles from Houston to one of the state’s least-populated regions, a place with high-desert vistas of the Davis Mountains and Big Bend where both of them have family roots. Their law office in Marfa has been the only full-time practice in Presidio County for more than 13 years. In 2012, Ferguson was elected judge of the 394th Judicial District, which covers more of the U.S.-Mexico border than any other district in Texas. Here Ferguson talks about shooting it straight, staying on the judge’s good side, and letting clients cry. Read more.

Twenty years ago, Paul Looney, 60, moved from Houston to the nearby town of Bellville to raise his daughter. He spent years commuting to the city every day to practice law but eventually realized there were opportunities in neighboring Hempstead, population about 5,700. Looney has been a happy and successful small-town attorney ever since. He talks about participating in the community, holding weekly happy hours, and avoiding anonymity. Read more.

When Natalie Cobb Koehler was a law student in Houston, she decided that she would move back home to practice law after passing the bar. Koehler and her family now live on the family ranch in Cranfills Gap in Central Texas. She has a broad solo law practice in nearby Meridian (population about 1,500) and has twice been elected as Bosque County attorney. Koehler also was the president of the Texas Young Lawyers Association from 2011 to 2012. Read more.

H.P. “Mike” Berkley, 65, is a solo practitioner outside Forestburg, a community near the Texas-Oklahoma border with a population of about 250. He went to Southern Methodist University School of Law and practiced in Dallas until moving to the country about 25 years ago. Berkley talks about marrying the town vet, being a content attorney in the middle of nowhere, and shooting turtles and tending cattle. Read more.