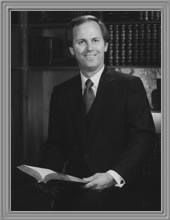 Bill Whitehurst is a partner in the Austin law firm of Whitehurst, Harkness, Brees & Cheng, P.C. After receiving a B.S. in pharmacy from the University of Oklahoma in 1968, he attended the University of Texas School of Law where he received a J.D. in 1970. While in law school he was a member of the Order of Barristers, Phi Delta Theta legal fraternity, the Friar Society and was on both the 1969 and 1970 national moot court teams.

Whitehurst was an associate attorney with Fulbright & Jaworski in Houston in 1971 before fulfilling an ROTC requirement and becoming assistant staff judge advocate with the United States Air Force stationed at Otis Air Force Base in Massachusetts. From 1972 to 1975 he was a circuit defense counsel in the USAF where he defended all USAF felony cases in Okinawa, Japan, Guam and Korea and additional felony cases in Thailand, Taiwan and the Philippines.

In 1975 he was staff director and counsel for the Texas House of Representatives Committee on Judicial Affairs. He joined his present law firm in 1975.

Whitehurst was very active in State Bar and Texas Young Lawyers Association activities. He served on the State Bar executive committee from 1982 to 1984 and the State Bar Board of Directors from 1981 to 1984. In addition, he served as president of TYLA from 1982 to 1983 and on the board of directors from 1979 to 1984. During his term as president, TYLA was recognized as the outstanding young lawyers organization in the nation by the American Bar Association Young Lawyer Division.

Active in community affairs, Whitehurst is an elder of the First Presbyterian Church of Austin and has served as vice president for the Friends of Live Oak Productions for the theatrical arts. He has spoken at numerous schools in the Austin Independent School District and has appeared on local radio and television programs discussing the legal system.