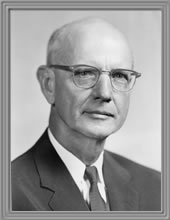 As eighty-first President of the Texas Bar during the years 1961-1962, William L. Kerr presided over the joint Texas-Mexico Bar Convention in San Antonio and Mexico City in July 1962. This was the first time in the history of the Bar of Texas that the annual convention was held outside of either Texas or the United States. William L. Kerr was born in Van Horn, Texas, on June 5, 1904. He was reared in Pecos, Texas, and attended Texas Christian University and the University of Texas before enrolling in the Cumberland University law school. He obtained his LL.B. degree in 1927; and after his admission to the Bar that same year, he began his practice of the law in Pecos. In the fall of 1927 he was elected county attorney for Reeves and Loving Counties but resigned in 1929 to resume his private practice. In 1933 Kerr was elected district attorney for the 109th Judicial District, and in 1942 he was elected district judge. He held this office until 1944 when he moved to Midland to re-enter private law practice. His two sons, William M. Kerr and Ted M. Kerr, practiced alongside William Kerr.

Before becoming State Bar President, Kerr served as chairman of several Bar committees. He was a member of the Board of Directors in 1938-39. He has also served in the A.B.A.'s House of Delegates. Kerr was a member of the Scottish Rite Masons and the Phi Kappa Psi social fraternity. He was district governor of the Rotary International in 1933-1934, and from 1946-5198 he was president of the board of regents of the State Teachers Colleges of Texas. In 1973 Kerr was honored by the University of Texas of the Permian Basin as one of the original Permian Basin pioneers. Kerr died on July 19, 1978.