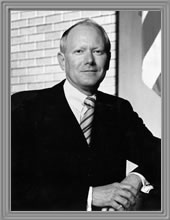 W. Frank Newton served as dean and professor of law at the Texas Tech University School of Law in Lubbock from 1985 to 2001. He graduated from Baylor University in 1965 with a degree in economics and cum laude from Baylor Law School in 1967. He earned an LL.M. from New York University School of Law in 1969 and Columbia University School of Law in 1978. Newton served as the chair of the Texas Equal Access to Justice Foundation, a director of the Texas Center for Legal Ethics and Professionalism, and a trustee of the Texas Supreme Court Historical Foundation. He also served as chair of the State Bar Legal Services to the Poor in Civil Matters Committee and the Task Force for the Delivery of Legal Services to Poor Texans. The Legal Services to the Poor in Civil Matters Committee later named an award for him to recognize the pro bono contributions of attorney groups.

Newton received the State Bar Presidents' Award in 1992 and presidential citations in 1987 and 1989. He was honored by the Texas Bar Foundation with its Lola Wright Foundation Award. Newton is a fellow of the American and Texas bar foundations and is a member of the American Law Institute. Newton has been a frequent lecturer and has written extensively on a variety of legal topics.