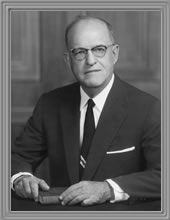 Virgil T. Seaberry Sr. was born in Poolville, Parker County, on March 3, 1892. He attended Southwest Teachers Normal College at San Marcos, taught school for two years at Millersview, and then received his legal education at the University of Texas, where he earned a law license in 1913 and an LL.B. degree in 1915. That same year he began to practice law at Paint Rock, but in 1917 he entered the first Officers Training Camp at Leon Springs. By the end of World War I he held the rank of first lieutenant in the army artillery. He then moved to Eastland, Texas, where he resumed the practice of law with John Turner. Licensed also to practice in Indiana, Arkansas, and California, Seaberry was elected President of the State Bar in 1957. He presided over the association's 75th anniversary celebration, which commenced with the presentation of certificates of appreciation to those lawyers who had practiced for 50 years or more in Texas.

Seaberry encouraged and strengthened the work of local Grievance Committees and increased the budget for the Texas Bar Journal. Seaberry also served as Bar vice-president in 1956-1957, as chairman of the Board of Directors in 1954-1955, and as director from 1952-55. He was chairman of the Rules Committee in 1955-1958 and was a State Bar delegate to the Federal Judicial Conference for the Fifth Circuit in 1955-1959. Seaberry was elected to the American College of Trial Lawyers, served on the Citizens Advisory Committee on the Texas Constitution in 1957, and headed the Citizens Committee on the Texas Constitution in 1948. In Eastland he was an active civic worker. He was mayor of Eastland in 1923, County Red Cross chairman during the 1920's, a member of the local Selective Service Board, and a Sunday School teacher at the First Methodist Church. Seaberry was married to Cleo Slaughter and had one daughter and one son, Virgil T. Seaberry, Jr., with whom he was practicing law at the time of his death on November 16, 1960.