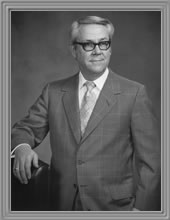 Travis D. Shelton became President of the State Bar of Texas in 1977. He succeeded in passing the one-time assessment referendum to raise the necessary money to complete the payments for the Texas Law Center. During Shelton's presidency, the Bar hired a new Executive Director, finished the year with a surplus of funds, and submitted guidelines for lawyer advertising to the Supreme Court of Texas.

Travis D. Shelton is the son of Santford and Lena Shelton. He was born on January 30, 1921, in Tahoka, Texas. He attended Texas Tech University as an undergraduate before he obtained his LL.B. degree in 1949 from the University of Texas where he was a member of the Phi Alpha Delta legal fraternity. Shelton was admitted to the Bar in late 1948, shortly before he graduated from law school, and began his practice in Lubbock. Shelton married Mary Lou Metcalf in 1946. They have two daughters and a son, Steve Shelton, who is also an attorney. During World War II Shelton served in the U.S. Coast Guard. He enlisted as an apprentice seaman in 1942 and was discharged in 1946 as a junior grade lieutenant.

Shelton served as president of the Lubbock County Bar in 1952. Before assuming the office of State Bar President, he was a director in 1965-1968 and vice-president in 1975-1976. He was a member of the American Bar and a charter life member of the Texas Bar Foundation. During 1949-50 Shelton was Lubbock's assistant county attorney, and from 1951-1957 he served as district attorney of the 72nd Judicial District. In August 1977 he was inducted as a member of the American College of Trial Lawyers. Shelton was a deacon in the Presbyterian Church and a member of the Democratic Party. Active on various Lubbock civic boards and committees, Shelton belonged to the Junior Chamber of Commerce and was a past president of the Lions Club. In 1976 he was chosen as Lubbock's "Executive of the Year." Shelton died on July 10, 2003.