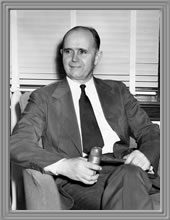 Maj. Townsend Bell was President of the State Bar of Texas during the 1943-1944 term when full aid to the war effort was the prime objective of the Bar. During this year the State Bar also helped to sponsor a traffic court conference and an institute on the fundamentals of federal taxation. Bell was born in Tenaha, Texas, on December 4, 1897. After his graduation from high school, he served in the U.S. Armed Forces during World War I. Following the war he enrolled at the University of Texas where he received his LL.B. degree in 1923. He was student editor of the 1922-1923 Texas Law Review and a member of the Chancellors and the Delta Sigma Rho and Phi Delta Theta fraternities.

Bell began his legal career as district attorney of the 4th Judicial District (Rusk, Shelby, and Panola Counties). Later he moved to Beaumont, and from 1926-1930 he was associated with the law office of Orgain & Carroll. He became a partner of this firm in 1930 and remained with it and its successor firms until his death. Besides being President of the State Bar, Bell also served on the Board of Directors; and in 1955-1960 he was vice-chairman of the State Bar Committee on Nuclear Energy. He was also a past president of the Jefferson County Bar Association and was the Beaumont Legal Secretaries' first "Boss of the Year" in 1961. Bell once served as vice-president of the Federation of Insurance Counsel. He was on the boards of directors of Texas Southern University and the Texas Law Enforcement & Youth Foundation, as well as a research fellow and advisory board member of the Southwestern Legal Foundation. He also belonged to the International Association of Insurance Counsel and was a Fellow of both the American College of Probate Counsel and the American Bar Foundation. Bell was a deacon in the Calder Baptist Church and a member of the Beaumont Country Club. He was married and the father of two sons. He died on March 1, 1969.