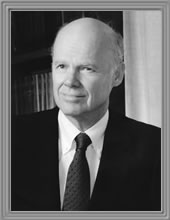 Tom B. Ramey, Jr. of Tyler was a life-long resident of Tyler. He entered the Navy in 1943 and received his commission from the Harvard Business School. He served duty on destroyers until 1946. After his Navy discharge, he returned to Harvard where he received his Master’s of business administration in 1949. He received his law degree from the University of Texas in 1951. He returned to Tyler to practice law and was a senior partner in the firm of Ramey, Flock, Hutchins, Jeffus, McClendon & Crawford until his appointment as associate justice of the 12th Court of Appeals in Tyler. He returned to private practice in December 1982 as a sole practitioner. Ramey returned to Ramey and Flock in 2002.

Ramey had served the State Bar in many capacities. He served as a director of the State Bar Board of Directors, and on the Client Security Fund Committee, the Continuing Legal Education Committee and the Continuing Professional Competence Committee. In the early 1970s, Ramey served on the Citizenship Committee, which was charged with creating course materials for public schools. He had also been a member of the Federal Judiciary Appointments Committee, the History and Traditions of the Bar Committee, and the Litigation and International Law sections. He also served as vice chair of the Tort and Compensation Section. He also served on the Penal Code and Criminal Procedure Committee and the Bar Rules Change Review Committee. He served on the State Bar College Board and had been a member of the Judicial Section. He also chaired the Goals Implementation of the Board, and served on the Staff Efficiency and General Counsel Advisory Committees of the Board.

Ramey had also been active in local bar activities. He served as president and as a two-term director of the Smith County Bar Association. Ramey was a member of the American Bar Association, the American Counsel Association, the Trial Attorneys of America, and the International Association of Insurance Counsel. He was an advocate of the American Board of Trial Advocates. He was a Sustaining Life Fellow of the Texas Bar Foundation and a Fellow in the American Bar Foundation. He served as a director of the Texas Chest Foundation, First City National Bank of Tyler, and the Pine Cove Conference Center. He served on the administrative board of Marvin United Methodist Church, where he had taught Sunday School for many years. Ramey was a founder of the Tyler Volunteers for Troubled Youth. Ramey died on October 9, 2015.