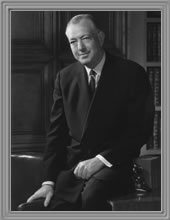 Thomas M. Phillips was elected President of the State Bar of Texas in 1967. During his year in office, the Texas Bar once again won the A.B.A.'s award as the outstanding Bar Association in the United States. Phillips' presidency saw the implementation of a new pattern of jury charges which were published and distributed to the Bar, as well as the intensification of an economics program for Texas lawyers. Phillips was born on November 12, 1916, in Greenville, Texas, and was reared in Marlin. His parents were Thomas Moody and Maye Louise S. Phillips. He received both his undergraduate and legal education at the University of Texas.

As a law student, Phillips was a member of the Chancellors, the Order of the Coif, and the Phi Delta Phi fraternity. He served as editor of the Texas Law Review and as president of his 1939 graduating class in which he ranked as valedictorian. After receiving his LL.B. degree, Phillips was admitted to the Bar m 1939 and immediately began to practice law with the Houston firm of Baker & Botts.

In 1941 Phillips married Edna Louise Hebert, and they had one daughter. Phillips served in the U.S. Armed Forces during World War II. In addition to his tenure as State Bar President, Phillips also served as president of the Houston Bar in 1964-1965, as a director of the American Judicature Society in 1968-1972, and as a member of the A.B.A. House of Delegates in 1974. He was a Fellow of the American College of Trial Lawyers and served on the executive committee of the International Association of Insurance Counsel.

In 1974, Phillips became a director of Champion International. During 1968-1973 he was a director of the Texas Gulf Corporation, and in 1970 he was elected to life membership on the board of trustees of the University of Texas Law School Foundation. In 1973 he was presented the Outstanding Alumnus Award of the University of Texas Law School at a luncheon ceremony in Fort Worth. Phillips died on August 8, 1991.