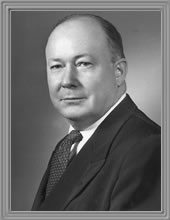 Allen Crowley was born on February 8, 1904, in Navarro County, Texas. He received his education in the Kerens public schools and at the University of Texas, from which he graduated in 1927 with an LL.B. degree. He was admitted to the Bar that same year and began his practice of the law in Fort Worth, where he lived until his death on May 14, 1964. Crowley was quite successful as a trial lawyer and specialized in the defense of damage suits and workmen's compensation cases on behalf of insurance companies. Soon after he began to practice in Fort Worth, he helped to establish the Fort Worth Junior Bar Association and served as one of its early presidents. Then in 1930 in Fort Worth Crowley actively participated in the first convention of the Texas Junior Bar, and in 1931 he was elected president of this organization. Crowley served as president of the Tarrant County Bar in 1932. He was a member of several State Bar committees and served as a director and vice-president before he was elected to the State Bar presidency in 1949. As president, Crowley got the Bar dues raised by means of a referendum in order to save the Bar from impending financial collapse.

Crowley was a member of the American Bar, American Judicature Society, American College of Trial Lawyers, Federation of Insurance Counsel, and International Association of Insurance Counsel for which he was serving as vice-president at the time of death in 1964. He also belonged to the Tejas Club and once was president of the Fort Worth Rotary Club. In 1929 Crowley married Zedau Bates of Fort Worth; and they had one daughter and one son, George A. Crowley, who now practices law in Fort Worth. Zedau Crowley died in 1942, and in 1946 Crowley married Dovie Goodman of Midland County. To this second marriage was born a daughter, Susan E. Crowley, who like her father and half-brother also became a lawyer.