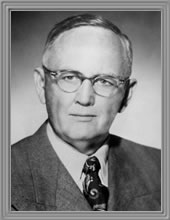 A noted tax attorney, R.N. Gresham was the 74th President of the Bar of Texas during 1954-1955. Gresham's presidency saw the passage by the Legislature of the Texas Business Corporation Act and the State Courts Housing Bill, as well as the revision of the Texas Probate Code. R.N. Gresham was born in Luling, Texas, on April 7, 1892. He received his legal education at the University of Texas, which named him to the Order of the Coif in 1964. Gresham passed the Texas Bar in 1916; and except for his service in World War I, he practiced in San Antonio from that year until his death on January 8, 1973. He married Gertrude Negley in 1921 and had two children.

Within the American Bar Association, Gresham was on the Committee on Memberships from Texas and the Credentials and Admissions Committee of the House of Delegates. He was a member of the House of Delegates from 1957-1973 and once served as chairman of the A.B.A.'s Taxation Section. Gresham wrote numerous articles on taxation and was widely in demand as a speaker on that subject. He served on the Institute Committee of the Tax Section, Southwestern Legal Foundation, and on the planning committee for the annual tax conference at the University of Texas in Austin; and during 1957-1958 he served on the Advisory Group, Sub-Chapter J, to the U.S. House Ways & Means Committee. Gresham was president of the board of trustees at St. Mary's School of Law and was a member of the Methodist Church, Canopus Club, Order of the Alamo, The Argyle, Port Bay Club, and the Scottish Rite Masons.