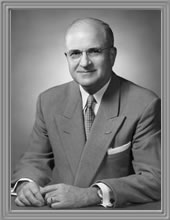 Robert G. Storey Sr. was born in Greenville, Texas, on December 4, 1893, and lived in Dallas from 1923 until his death. Storey served in both World Wars. A Phi Beta Kappa, he received his academic and legal training from the University of Texas and S.M.U. In 1947 he was awarded an honorary LL.D. degree from Texas Christian University. Storey was president of the Dallas
Bar in 1934. Over the years he was on various State Bar committees and was a director at the time of his election to the presidency in 1948. During his term as president, the Judicial Retirement Act was passed. An active member of the American Bar from 1927, Storey was elected to the House of Delegates for five years and served as President of the A.B.A. in 1952-1953. Then in 1954 Storey was elected President of the Inter-American Bar Association at its convention in Sao Paolo, Brazil. He was an honorary member of the Bars of Canada, Peru, Mexico, Argentina, Korea, Japan, Australia, and the Ryukyu Islands. In 1921-1922 Storey was national executive committeeman of the American Legion, and in 1921-1923 he served as assistant Attorney General of Texas for criminal appeals. He was a regent of the University of Texas from 1924-1930, and in 1932 he was a delegate to the International Convention of Comparative Law at The Hague.

In 1945-1946 Storey acted as executive trial counsel to Justice Robert H. Jackson of the U.S. Supreme Court in the prosecution of Herman Goering, Rudolf Hess, and other high-ranking Nazi officials in the Nuremberg war crimes trials. For his service at Nuremberg, Storey received the U.S. Medal of Freedom and the French Legion of Honor. From 1947 Storey served both as a dean of the S.M.U. law school and as president of the Southwestern Legal Foundation. He married Hazel Porter in 1917 and had two sons, both attorneys. After her death in 1962, he married Jewel Hope Osborn in 1965. Storey died in Dallas on January 16, 1981.