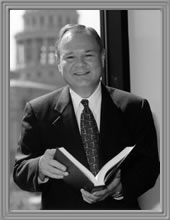 Richard Pena is the owner of the Law Offices of Richard Pena, P.C. The principal office is in Austin, with a branch office in McAllen. He earned his undergraduate and law degrees from the University of Texas. His practice is concentrated primarily in workers’ compensation and personal injury. He is a past president of the Travis County Bar Association and Capital Area Mexican-American Lawyers Association. He is a past member of the State Bar Board of Directors and served on its executive committee for two years. He also served as chair of the Texas Bar Foundation Board of Trustees, as president of the American Bar Foundation, and as a delegate to the ABA Board of Governors.

Pena is a Master of the American Inns of Court. He received three State Bar presidential citations and was honored as the Outstanding Hispanic Lawyer in Austin in 1989. He is a member of the Colorado and American Bar associations. He was chair of a U.S.-Russian Joint Conference on the Rule of Law and, in 2006, received the Eisenhower Achievement Award from the program. He is on the advisory board of People to People Ambassador Program. In the community, Pena served as chair of the Homeless Task Force and on the boards of the Boys Club of Austin, Center for Battered Women, and Austin Association of Retarded Citizens. Pena is also a member of the Texas Trial Lawyers Association, Pro Bono College, and Texas Center for Legal Ethics and Professionalism. He is a founder of Center Court Mediation Group.