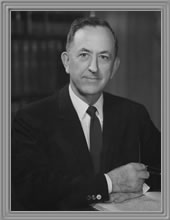 Paul Carrington Sr., a native of Missouri, received his academic degree from the University of Missouri in 1915 and his LL.B. from Harvard law school in 1917. As a law student, he was a member of the Order of the Coif. During World War I Carrington attained the rank of second lieutenant while serving as an instructor in primary flying at the AMA, USA. He married Frances De Witt and had one son and one daughter. Carrington was admitted to the Bar in 1919, moved to Dallas, and began his practice of the law. He was president of the Dallas Bar in 1940, and also served as president of the East Texas Bar. Carrington has served in the American Bar's House of Delegates and as chairman of the A.B.A.'s Committee on Post-War Planning, standing Committee on Commerce, and Section on Corporation, Banking, and Business Law.

Before assuming the presidency of the State Bar of Texas in 1960, Carrington was a member of the Board of Directors and held the office of vice-president in 1958-1959. As President of the State Bar, Carrington strengthened local Bar activity and organized several new multi-county district Bars. He promoted harmony and friendship with the "Bara Mexicana" and helped to plan the 1962 combined Texas-Mexico Bar Convention in San Antonio and Mexico City. He also encouraged cooperation between the Texas Bar and the Bar Associations of neighboring states. A Mason and former president of the Harvard Law School Association, Carrington wrote several articles for the Texas Bar Journal and coauthored the book Articles of Partnership for Law Firms. He was a trustee of the Southwestern Legal Foundation, an executive council member of the American Society of International law, and a director of both the American Judicature Society and American Bar Endowment. In 1973 he received the American Bar Foundation Fellows Award for more than 50 years of outstanding legal service. Carrington died on June 28, 1988.