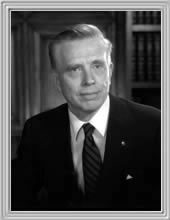 Orrin W. Johnson of Harlingen was of counsel to the law firm of Colvin, Chaney, Saenz & Rodriguez, L.L.P. Born in Minneapolis, Minn., Johnson received a bachelor’s degree in 1942 and a J.D. in 1947 from the University of Texas at Austin. While at the university, he served as president of the Law School Student Body and associate editor of the Texas Law Review. He became a member of the Chancellors, Order of the Coif, and Phi Delta Phi. In 1947, he was named an “Outstanding Student.”

Johnson had practiced law in Harlingen since 1947. He served on the State Bar Board of Directors from 1972 to 1975 and held several positions with the Texas Bar Foundation, including chair of the Bar Foundation Fellows and as a Sustaining Life Fellow. He formerly served as secretary and vice chair of the Fellows and as a member of the Board of Trustees. In 1998, he was named an Outstanding 50-Year Lawyer by the Foundation. Other Bar activities had included membership on the Bar Journal Committee and in the Real Estate, Probate and Trust Law Section.

Johnson was a combat Marine in World War II, serving overseas for almost two and a half years. His wartime services included five major campaigns of the Pacific War, the last of which was at Iwo Jima. He was awarded a Presidential Unit Citation and three Navy Unit Citations. Wounded once, he returned to the States in May 1945. He remained in the U.S. Marine Corps Reserve after the war, retiring in 1958 as a major. He had served as a trustee of the Marine Military Academy, Inc.

Johnson served many community organizations and projects, including several years’ service as an advisory member on the Board of Trustees of the Valley Baptist Hospital and as director and president of the Cameron County Good Government League. He was a past chair of the Board of Stewards of a Methodist church and a Certified Methodist Lay Speaker. Johnson died on May 16, 2014.