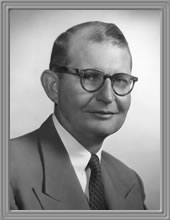 Newton Gresham served as President of the Bar of Texas during the years 1956-1957. As head of the State Bar, Gresham strove to help the lawyers in the smaller cities and towns of Texas to understand and appreciate more fully the State Bar organization; and in order to achieve this increased professional understanding, Gresham made a special effort to visit more than the usual number of local Bar association meetings. Gresham is the son of Edward A. and Beulah Selman Gresham. He was born in Jewett, Texas, on July 21, 1905. He received his B.A. degree in 1924 from Sam Houston State Teachers College, where he was a member of Alpha Chi and Alpha Tau Omega fraternities. He then attended law school at the University of Texas. A student editor of the Texas Law Review, Gresham received his LL.B. degree and was admitted to the Bar in 1930.

Besides belonging to the State Bar of Texas, Gresham was also a member of the American Bar Association, the American College of Trial Lawyers, the International Association of Insurance Counsel, and the Federation of Insurance Counsel. Gresham is a Fellow of the American Bar Foundation. In 1959-1965 Gresham was a regent for the State Senior Colleges, and became a member of the Coordinating Board of the Texas College and University System in 1965. Gresham belonged to the Episcopal Church, the Democratic Party, the Rotary Club and various Texas Masonic orders. In 1933 Gresham married Mary Frances Stone, and they had one daughter. Gresham lived in Houston, working as a partner in the prestigious law firm of Fulbright & Jaworski. Gresham died on June 5, 1991.