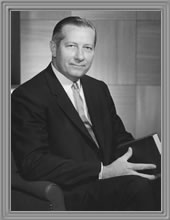 A native of Grandview, Texas, Morris Harrell received his B.B.A. and LL.B. degrees from Baylor University in 1942. After his admission to the Bar that same year, he served in the U.S. Naval Reserve until 1945 when he moved to Dallas and began his practice of the law. Harrell was a prominent member of the firm of Rain, Harrell, Emery, Young & Doke. He married Rhoda "Rusty" Baylor, and they had a son and two daughters. From 1947-1951 Harrell was assistant U.S. Attorney for the Northern District of Texas. He was a former president, vice-president, and director of the Dallas Bar Association. In 1966 he was elected to the State Bar Board of Directors and became chairman of the board in 1968.

As State Bar President during the years 1970-1971, Harrell sponsored the most intensified public relations campaign of any Bar in the United States. He organized a new State Bar section called the Texas Conference of Bar Presidents, and he initiated a Texas legal tapes cassette program. Harrell also presided over a South Texas Bar Assembly at McAllen to further advance the program of bringing the State Bar closer to the local lawyer. Harrell was appointed to the State Bar Executive Committee in 1973 and was elected chairman of the Resolutions Committee in 1974. As a member of the American and Federal Bar Associations, he served on the A.B.A.'s Sections on Taxation, Judicial Administration, and Antitrust Law. In 1971 he was elected to the House of Delegates, and in 1974 he was chosen secretary of the National Conference of Bar Presidents.