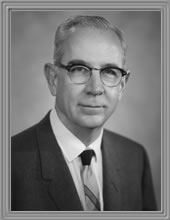 Maurice R. Bullock, the son of County Judge Jesse H. and Georgia W. Bullock, was born in Colorado City, Texas, on August 20, 1913. As an undergraduate, he attended North Texas Agricultural College and the University of Texas. He received his LL.B. degree in 1936 from the University of Texas, where he was a member of the Order of the Coif. Later that year he was admitted to the Bar, practiced briefly in Fort Worth, and then went to Fort Stockton where he remained until 1965 when he moved to Midland. Bullock married Wildo Marie Frost in 1939 and had a son and a daughter.

A member of the Midland County, Trans-Pecos, and American Bar Associations, Bullock served as a director of the State Bar and as vice-president in 1954-1955 before being elected to the presidency in 1955. As president, Bullock initiated changes in the State Bar Rules to provide for better continuity of executive leadership through a president-elect system and to strengthen disciplinary rules. He established a full-time office of Director of Public Information; and during his term the Texas Probate Code, ''the product of more than ten years of study and effort,'' which had been sponsored primarily by the State Bar, finally became a law. Bullock, who served as Pecos County attorney in 1939-1943 and as chairman of the State Securities Board in 1957-1966, was a Fellow of the American and Texas Bar Foundations and the American College of Probate Counsel. He was a member of the A.B.A.'s House of Delegates in 1958-1962, was a director of the American Judicature Society, and was a trustee of the Southwestern Legal Foundation. In 1962 he was a member of the Texas Advisory Committee to the Civil Rights Commission. Bullock was a Methodist, Democrat, and Mason. He belonged to the Midland Chamber of Commerce, Country Club, and Petroleum Club and is the author of several articles on oil and gas lease law in Texas. Bullock died on August 15, 2004.