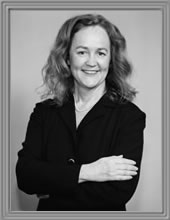 Martha Dickie, a partner in Almanza, Blackburn & Dickie, L.L.P. in Austin, practices general litigation. She was employed with Minton, Burton, Foster, and Collins, P.C. from 1982 to 2004. After graduating from the University of Texas School of Law in 1980, Dickie served as a law clerk for U.S. District Judge Jack Roberts in Austin from 1980 to 1982. In 1977, she graduated Phi Beta Kappa from the University of Texas with a B.A. with High Honors in Plan II.

Dickie received the Outstanding Third-Year Director Award while serving on the State Bar Board and Presidential Citations in 1997 and 1998 for her service to the Bar. As State Bar President, she helped draw attention to the issue of depression and other mental illnesses that can affect lawyers through the important video, “Practicing from the Shadows.”