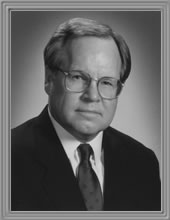 Lonny Morrison is the owner of Offenhauser Oil & Gas, LLC. in Wichita Falls. He formerly was a partner in the law firm of Morrison & Shelton, where his practice focused on litigation with a heavy concentration in cases involving oil and gas law. He earned a B.A. from Washburn University in 1964, an MBA from Oklahoma State University in 1965, and an LL.B. from the University of Texas in 1968. He is certified in civil trial law by the Texas Board of Legal Specialization. Morrison served as chair of the Texas Commission for Lawyer Discipline. He received the State Bar of Texas President’s Award in 1991 and presidential citations in 1990 and 1991. Morrison served as a State Bar delegate to the American Bar Association House of Delegates and was a trustee and vice chair of the Texas Bar Foundation. He served as a State Bar director from 1987 to 1990 and was a member of the Texas Trial Lawyers Association, Association of Trial Lawyers of America, American Judicature Society, and the Wichita County Bar Association. He is a member of the American Association of Petroleum Geologists, the North Texas Geological Society, the Texas Alliance of Energy Producers, and the Independent Petroleum Association of America.