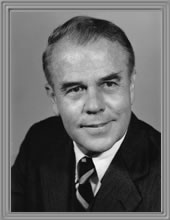 The Texas Law Center was financed and built during the 1974-1975 State Bar presidency of Lloyd P. Lochridge, Jr., of Austin. The Bar implemented a statewide program of law-focused education in the Texas public schools, and the Client Security Fund was adopted. Also, during 1974-1975 there was a continuation of the statewide lawyer referral system, and improvements were made in the standards of Bar admissions.

Lloyd P. Lochridge, Jr., was born in Austin, Texas in 1918, the son of Franklyn B. and Lloyd P. Lochridge, Sr. He married Frances Potter in 1943 and has two sons and four daughters. One son, Patton G. Lochridge, also practices law in Austin. Lochridge attended Princeton University and received his A.B. degree cum laude in economics in 1938. He then went on to Harvard law school and graduated with an LL.B. degree in 1941. He was admitted to the Bar of the District of Columbia in 1942 and to the State Bar of Texas in 1945. He practiced in Mission, Texas, from 1945-1959 before moving to Austin. During World War II he served as a lieutenant commander in the U.S. Navy and retired from the Navy as a commander.