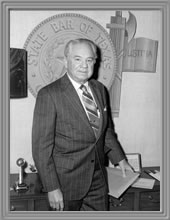 Leon Jaworski was born in Waco on September 19, 1905. After finishing high school at age 15, he immediately entered Baylor University law school. He graduated at age 19 and received his LL.M. degree from George Washington University the next year. He was only 20 when he began practicing law in Waco after being admitted to the Bar in 1925. He subsequently received honorary LL.D. degrees from 11 different colleges and universities. He married Jeanette Adam and had three children. Besides being President of the State Bar of Texas in 1962-1963, Jaworski also served as president of the following organizations: American Bar Association in 1971-72, Houston Bar Association, American College of Trial Lawyers, and Texas Civil Judicial Council. He was a Fellow of the American Bar Foundation, a member of the American Law Institute, and chairman of the board of trustees of the Southwestern Legal Foundation.

Jaworski, who received over 30 civic awards, served as a colonel in the Judge Advocate General's Department during World War II. After the war he was chief of the War Crimes Trials Section of the Army in the European Theater, and for this service he was awarded the Legion of Merit. Jaworski was a senior partner of the Houston firm of Fulbright & Jaworski and chairman of the executive committee of Houston's Bank of the Southwest. He served as vice-president of the National Space Hall of Fame and as director of the Texas Bill of Rights Foundation. Jaworski acted as an advisor to Presidents Lyndon B. Johnson and Richard M. Nixon. During 1973-1974 he was Special Prosecutor for the Watergate investigation force, and in 1977 he was appointed as special counsel to the congressional committee probing the South Korean bribery scandal. Jaworski wrote numerous articles for Bar and professional journals. He published After Fifteen Years, a behind-the-scenes account of the Nazi trials, and The Right and the Power, a national bestseller about Watergate. Jaworski died on December 9, 1982.