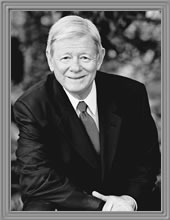 He received his B.S. in education from Southwest Texas State University and his J.D. from the University of Texas School of Law in 1970. He joined Bracewell & Patterson in 1970, concentrating in public and education law, employment discrimination, and litigation. Frels served as president of the Houston Bar Association during 1994-1995 and on the State Bar Board of Directors from 1995 to 1998. He chaired the State Bar Lawyer Referral Committee and the Houston Bar’s Voluntary Lawyer Program. Frels is a founder and past chair of the State Bar School Law Section. The Texas Young Lawyers Association chose Frels as the Outstanding Young Lawyer of Texas in 1979.