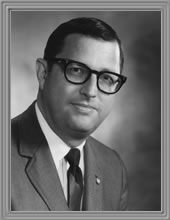 Josiah Wheat became President of the State Bar of Texas in 1969. Wheat's presidency saw the doubling of the Bar dues and budget, permitting the first large-scale increase in the activities of the State Bar. The structures of both the Bar Journal and the annual conventions were revamped, and a Bar program was instituted for the publication and sale of Texas legal forms and tapes. Wheat was admitted to the Bar in 1952. He was a director in 1963-1967 and served as chairman of both the Water Laws Committee and the Section on Environmental Law and as vice-chairman of the Committee on Continuing Legal Education. In the A.B.A. he was a charter member of the Special Committee and the Standing Committee on Environmental Law. He served in the House of Delegates from 1972-1978.

The son of attorney James E. and Ruby R. Wheat, Josiah Wheat was born in Woodville, Texas, on December 21, 1928. He received his B.A. degree from the University of Texas in 1951. As an undergraduate, he was on the Student Court and the Cactus yearbook staff and was vice -president of the Sigma Alpha Epsilon fraternity. In 1952 he received his LL.B. degree from the Texas law school where he was editor of the Texas Dicta newspaper and a member of the moot court. Following college, Wheat served until 1954 as a sergeant first class in the U.S. Army, then practiced law in Woodville.

In 1955-1956 he was Tyler County attorney, and from 1959 he became Woodville city attorney. He also served as president of both the Texas Water Conservation Association and the Deep East Texas Development Counsel. He was a member of the Methodist Church, Masonic Lodge, Rotary Club, and Chamber of Commerce. He authored numerous articles for the annual bulletin of the Tyler County Dogwood Festival and the Texas Bar Journal. Wheat married Glendale Richter in 1952 and had one son and three daughters. Wheat died on November 19, 1997.