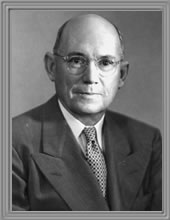 Joseph B. Dooley was born in San Angelo, Texas, on December 13, 1889, and attended public schools in San Angelo, Fort Worth, and Nacogdoches. He received his LL.B. degree from the University of Texas in 1911 and was thereby admitted to the Texas Bar since at that time a University of Texas degree automatically entitled one to receive a law license. After his graduation, Dooley began his practice of law in Amarillo. In 1925 he joined the former Amarillo law firm of Underwood, Johnson, Dooley & Simpson and remained with them for 22 years. While in Amarillo, he served as president of the local Bar and as a trustee of the Amarillo School District. In 1940 Dooley was appointed by the Supreme Court of Texas as a member of the court's Advisory Committee on Rules of Civil Procedure, and in 1941 he became Amarillo city attorney. Then in 1947 President Harry S. Truman appointed him as federal judge for the Northern District of Texas. During his 19 years on the federal bench, Dooley won widespread respect and admiration for his legal research and efficient handling of complex litigation. Dooley became actively associated with the Texas Bar in 1918. He served as a director of the State Bar of Texas in 1942-1943, as vice-president in 1943-1944, and as president in 1944-1945.

In his position as State Bar President, Dooley contributed much to strengthen the foundation of the organization and to assist and guide state legislative enactments dealing with limitation, the selection of jurors in jury-wheel counties, and the service of probate notices. He continued the Bar's attack on unauthorized practitioners of the law, and he supervised the compilation of the first "Roster of the State Bar." Judge Dooley was an Episcopal chancellor for 25 years and a member of the Amarillo Chamber of Commerce, Amarillo Country Club, Lions Club, and Phi Delta Phi fraternity. He married Carrie Colgin in 1913 and had two children. His son-in-law was also an attorney. Judge Dooley died on January 19, 1967.