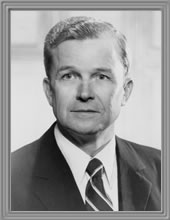 During the 1975-1976 State Bar presidency of John M. Lawrence III, the Texas Law Center was completed and dedicated. A Disciplinary Implementation Committee was created with emphasis on self discipline by local Grievance Committees and a re-emphasis of the professional development programs, including the Continuing Legal Education and PEER Committees. This action by the Bar contributed to an all time high sales of legal publications and tapes and the participation of 8000 lawyers in legal institutes, all of which resulted in the State Bar of Texas' winning the A.B.A.'s Award of Merit for single project excellence.

Lawrence was born in Bryan, Texas in 1921, the son of Mattie M. and John M. Lawrence, Jr. He attended Texas A & M University and received a B.A. degree in economics in 1943. As an undergraduate, he was a captain in the R.O.T.C., a member of the Ross Volunteers, and a senior class officer. Lawrence attended law school at the University of Texas. He was admitted to the Bar in 1948 and received his LL.B. degree in 1949. During World War II Lawrence served as a U.S. Army field artillery captain in the Pacific and Philippine Campaigns and sat as a judge during the Yokohama war crimes trials.