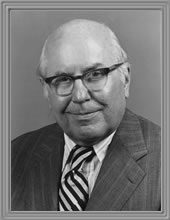 Leroy Jeffers was born in Ferris, Texas, on October 15, 1909, the son of Theodore F. and Cynthia E. Jeffers. He attended the University of Texas as an undergraduate and law student. He received his LL.B. degree with highest honors in 1932. As a student at the University, Jeffers was a member of Delta Theta Phi fraternity, Chancellors, Friars, Order of the Coif, and the U.T. Debate Team. He was editor-in-chief of the Texas Law Review in 1931-32. After his admission to the Bar in 1932, Jeffers practiced in San Antonio; but in 1942 he moved to Houston and continued to live there until his death. He was a member of the firm of Vinson & Elkins.

In 1935-39 Jeffers served as assistant criminal district attorney for Bexar County. He was president of the Houston Bar in 1968-69, president of the Houston Legal Foundation in 1969-70, and chairman of the A.B.A.'s Section on Antitrust Law in 1970-71. Jeffers was elected President of the State Bar of Texas for the 1973-74 term. As president, Jeffers effectively spearheaded the opposition in Texas to federal no-fault legislation and anti-lawyer legislation. The Bar passed a referendum increasing the annual dues to $65, and plans for the construction of the Texas Law Center were completed and approved. Jeffers served in the A.B.A.'s House of Delegates from 1973 and was on the board of directors of the American Judicature Society. He was a Fellow of the Texas and American Bar Foundations. He served as chairman of the University of Texas board of regents in 1957-59 and was a member of the 1973-74 Texas Constitutional Revision Commission. He wrote numerous articles for law reviews and Bar journals.

A Democrat and former Episcopalian vestryman, Jeffers belonged to the Houston Club, Allegro Club, and Philosophical Society of Texas. In 1969 he received the Outstanding Alumnus Award from the University of Texas law school. He married Nell Elise Walker in 1935. They had one daughter and one son, John L. Jeffers, Jr., also a Houston attorney. Jeffers died on July 4, 1979.