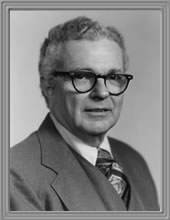 J. Chrys Dougherty was born in Beeville, Texas, in 1915. His father was also an attorney. In 1937 he received his B.A. degree with honors from the University of Texas. He was a member of Phi Beta Kappa, Phi Eta Sigma, and Beta Theta Pi. He then attended Harvard law school and graduated in 1940.

In 1948 he received a diploma from the Inter-American Academy for International and Comparative Law in Havana, Cuba. During World War II he served as an officer in the U.S. Army and Coast Artillery, first in counter-intelligence and later in France as a member of the Judge Advocate General’s Foreign Claims Staff. In 1949 he became a special assistant to the Attorney General of Texas, charged with defense of the State of Texas’s interest in the off-shore continental shelf. Dougherty practiced law in both Beeville and Austin with much of his work devoted to estate planning and administration.

A member of the State Bar starting in 1946, he served on numerous committees before assuming the presidency in 1979-1980. As president, he was a pioneer for pro bono legal services, and his efforts helped to build a strong working partnership between the State Bar of Texas and legal services providers. Later in his career, he helped to establish Texas Appleseed, an organization of volunteer lawyers and other professionals who work to promote social and economic justice for all Texans. Each year, the State Bar bestows an award in Dougherty’s name to an outstanding legal services staff attorney to honor his commitment to pro bono.

A Presbyterian, Dougherty was a director of the Austin National Bank and a major in the U.S. Army Reserves. He served as Honorary French Consul in Austin and was affiliated with a number of civil and philanthropic groups. In 1948 Dougherty married Mary Ireland Graves, and they had two children. She died in 1977, and in 1978 he married Bea Ann Smith, also an Austin attorney. Following their divorce, in 1982 he married Sarah Blair Randle, who died in 1997.