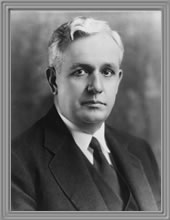 John H. Bickett, Jr. was born on July 29, 1892, at Cameron, Texas. He was the son of John H. and Minnie M. Bickett. He received his formal education at San Antonio. During World War I he enlisted as a private and ended his military career as a regimental sergeant major. Bickett resumed his San Antonio practice after the war. He married Lulu W. Styles in 1924, and in 1925 he was elected president of the San Antonio Bar Association. From 1924-1934 Bickett was a member of the State Board of Legal Examiners, and in 1934 he was appointed by Gov. Miriam A. "Ma" Ferguson to fill an unexpired term on the 4th Court of Civil Appeals. Judge Bickett was then elected to that bench as chief justice for a 6-year term but resigned in 1935 to move to Dallas to become general counsel for the Southwestern Bell Telephone Company.

Before his election as President of the State Bar in 1945, Bickett had served the organization by membership on several committees, including Uniform State Laws in 1933-1934; Substantive Law Reform in 1933-1935; Legal Education and Admission to the Bar, of which he was chairman, in 1938-41; and Bill of Rights, again as chairman, in 1940-1941. As president, Bickett wrote in the Bar Journal that a lawyer's labor is "to maintain the majesty and the dignity of the law, to substitute the rule of reason for that of force, and to strive worthily as a minister of justice." Bickett was a director of the American Judicature Society in 1939 and chairman of the University of Texas board of regents from 1943-1945. He was also a member of the board of governors for the law school at St. Mary's University in San Antonio. Bickett belonged to the American Law Institute, the Texas Philosophical Society, the Texas State Historical Association, the Highland Park Presbyterian Church, and the Critics Club of Dallas. Judge Bickett died on May 1, 1947.