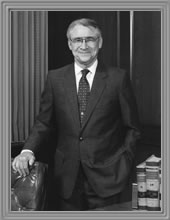 Joe H. Nagy retired from a long career, including as a senior partner in the Lubbock law firm of Crenshaw, Dupree & Milam. A native of Pearsall, Nagy earned a B.S. from Texas A&M in 1950 and an LL.B. from the University of Texas School of Law in 1958. Nagy served on the board of directors of the State Bar of Texas in 1975-78. He was a former president and director of the Lubbock County Bar Association.

Nagy was a member of the Texas Association of Defense Counsel and a Sustaining Life Fellow of the Texas Bar Foundation. He had been an adjunct professor at the Texas Tech School of Law and served on several State Bar committees.

Nagy was a member of the First United Methodist Church of Lubbock. He served as chair of the administrative board, the finance commission and the Boy Scout Troop Council, as well as many committees. He was president of the P.T.A. twice and was a former member of the Lubbock Lions Club. Nagy had been named “Boss of the Year” by the American Businesswomen's Association and had been active in the Boy Scouts and Campfire Organizations. He was a member of the Yellowhouse Lodge in Lubbock #841 A.F. and A.M. and the Scottish Rite. Nagy died on April 6, 2013.