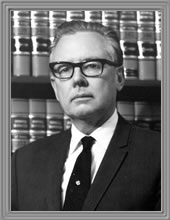 The 1972-73 State Bar presidency of Jim D. Bowmer was termed "the renaissance of lawyer influence in Texas." Among the many Bar-sponsored bills enacted by the Legislature were the new Penal Code, Family Code, Auto Reparations Reform Bill, and Prepaid Legal Services authorization. Computerized legal research for Texas moved towards reality with the organization of TexLex, Inc., a State Bar affiliated corporation to oversee the program; and the State Bar Board of Directors districts were realigned to reflect recent shifts of population.

Jim D. Bowmer was born on May 4, 1919, in Temple, Texas. His father, attorney DeWitt Bowmer, was a colleague of Few Brewster, 60th President of the Texas Bar. Jim Bowmer received his B.A. and LL.B. degrees, both with honors, from Baylor University. He was admitted to the Bar in 1942 and then served during World War II with the Judge Advocate General Department.

Bowmer became a member of the American Law Institute, American Judicature Society, U.S. Circuit Judge Nominating Commission, and Texas Judicial Planning Committee. He served as Bell County attorney in 1946-4 7 and as State Bar chairman of the board in 1970-71. He was a former member of the A.B.A.'s House of Delegates and a Fellow of both the American College of Trial Lawyers and the American Bar Foundation. Bowmer once taught Criminal Law and Procedure, Water Law, and other subjects at Baylor and had written articles for several journals. He was a former member of the board of regents of the National College of Criminal Defense Lawyers and Public Defenders. A Baptist and Mason, Bowmer held high offices in the Temple Chamber of Commerce, Kiwanis International, Knights of Pythias, and Texas Explorers Club which he helped to organize. He worked with the Battleship Texas Commission, Big Thicket Association, and National Park Foundation. Bowmer and his wife Daurice Spoonts Yarbrough had two daughters. Bowmer died on July 20, 2006.