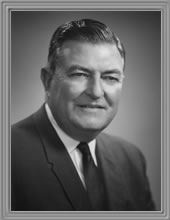 During the 1971-72 State Bar presidency of James C. Watson, extensive revisions were made in the Bar's banking and accounting systems, mailing operations, printing department, dues-billing procedure, and election balloting, all of which revisions were geared to improving the managerial efficiency of the Bar. Watson initiated the first use by the Texas Bar of computerized legal research and succeeded in getting the Bar to adopt a new Code of Professional Responsibility in order to modernize its old Canon of Ethics.

Watson was born in Longview on June 8, 1917. He graduated in 1941 from the University of Texas, where he received his B.A. and LL.B. degrees and was affiliated with the Texas Cowboys, Friars, and Kappa Alpha Order. Although he was admitted to the Bar in 1941, he began his law practice in 1945 after serving in the Air Force during World War II. He attained the rank of major and was awarded the Distinguished Flying Cross with four oak-leaf clusters and the Air Medal with two clusters. He married Dorothy Salisbury in 1945 and had one daughter. Watson practiced in Houston from 1945-52 and then moved to Corpus Christi. A Fellow of the Texas Bar Foundation, Watson was in 1966-67 both president of the Texas Association of Defense Counsel and a special hearing officer of the U.S. Department of Justice for Universal Military Training and Service.

Watson was killed in an automobile crash on December 15, 1972, while on his way home from a Bar-related Austin meeting of the Chief Justice's Task Force for Court Improvement.