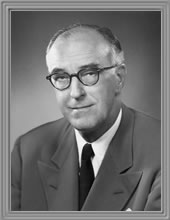 As President of the State Bar of Texas, James L. Shepherd Jr., had the task of encouraging the participation of young lawyers returning home from World War II. He reactivated interest in local and district Bar associations and helped to secure legislative passage of a bill increasing judges' salaries. During his presidency the Bar made a marked advance towards establishing a close and cooperative relationship between the judiciary and the practicing lawyers. Shepherd was born in Huntsville, Texas, on January 22, 1893. He received his B.A. degree in 1916 and his LL.B. degree in 1917 from the University of Texas. He was admitted to the Bar and entered the practice of law in Colorado City with his father, Judge James L. Shepherd, Sr. Soon thereafter, he was invited to join the Houston firm of Baker, Botts, Parker & Garwood. He became a full partner of this firm in 1929, and his name was added in 1954.

Shepherd was president of the Houston Bar in 1945 and President of the State Bar in 1946-1947. He worked in the American Bar Association for 38 years as an active member and then as chairman of the House of Delegates. He was chairman of the A.B.A.'s Mineral Law Section in 1938-1939 and of its Ethics Committee in 1958-1960. Shepherd was also affiliated with the Order of the Coif, Chancellors, Phi Delta Phi legal fraternity, Delta Chi social fraternity, Democratic Party, Episcopal Church, Holland Masonic Lodge, and Texas Ex-Students' Association for which he once served as vice-president. He was a member of the Houston Chamber of Commerce Water Committee, and during World War II he served on the Harris County Selective Service Board. In the early 1960's he travelled to Washington, D.C., as a special advisor to President John F. Kennedy on civil rights matter. In 1919 Shepherd married Marguerite C. Street, and they had one son and one daughter. She died in 1958, and in 1959 he married Helga Jacobsen. Shepherd died in Houston on October 8, 1964.