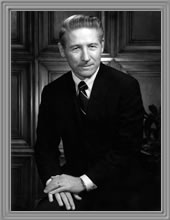 James B. Sales of Houston is of counsel to the Houston office of Fulbright & Jaworski, L.L.P. A native of Weimar, Sales earned a B.S. from the University of Texas in 1952 and a LL.B. (with honors) from the University of Texas School of Law in 1960. Sales served on the board of directors of the State Bar of Texas in 1983-87. He served as chairman of the board of directors in 1985-86 and as a member of the executive committee from 1983 to 1987. While serving on the board of directors, Sales served as chair of the Goals and Implementation Committee and as a member of the Budget Committee, the Audit and Finance Committee, and the Professional Development Committee.

As president of the State Bar, Sales worked to improve the grievance complaint process, support the delivery of legal services to the poor, and expand the concept of alternative dispute resolution, among other accomplishments.

As chair of the commission, Sales developed the Texas Trial Academy, the first trial law clinic for Texas legal aid lawyers, and a special two-day family law institute that was presented in conjunction with the annual Poverty Law Conference.

In 2011, Houston Mayor Annise Parker proclaimed May 3 as James B. Sales Day in his honor. Then-State Bar President Terry Tottenham praised Sales for his accomplishments, including his efforts to promote professionalism among lawyers, implement Texas’s IOLTA program, and bolster services to lawyers suffering from substance abuse and mental health issues. As chair of the Texas Access to Justice Commission, Sales helped secure $20 million to help fund legal services to the poor.

Sales is a Fellow of the American College of Trial Lawyers and the International Academy of Trial Lawyers, and an advocate of the American Board of Trial Advocates. He authored the treatise “Product Liability Law in Texas” (1st ed. 1985) and co-authored the treatise “The Law of Strict Tort Liability in Texas” (1st ed. 1977). Sales has written numerous other law review articles and has spoken at many institutes and seminars sponsored by the State Bar of Texas and the various law schools in the state.

Sales served as a trustee of South Texas School of Law and as a director of the Gulf Coast Legal Foundation and of the Inns of Court. He served as a member of the Advisory Board of the Texas College of Trial Advocacy. Sales received the Texas Bar Foundation award for outstanding legal writing in 1977, 1978, and 1985.