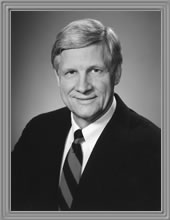 Jim Branton was president and founding shareholder in the San Antonio law firm of Branton, Hall, Rodriguez, Cruz, P.C., where he concentrated his practice in personal injury litigation. He was board certified in civil trial law and personal injury trial law since 1978. He earned a B.A. from the University of Texas and LL.B. from the U.T. School of Law in 1962. After graduating from law school, Branton served as a captain in the U.S. Air Force where he was a judge advocate. Branton served as president of the San Antonio Bar Association, San Antonio Chapter of the American Board of Trial Advocates, San Antonio Trial Lawyers, and the Texas Trial Lawyers Association. Branton served as a State Bar director from 1984 to 1987, was on the board of trustees of the Texas Bar Foundation from 1987 to 1990, and was its chair from 1989 to 1990. He also served as treasurer of the Texas Center for Legal Ethics and Professionalism. He had served on many committees of the State Bar, including the Grievance Committee, Professionalism Committee, and the Pattern Jury Charge and Administration of Justice committees. He served on the Texas Supreme Court committees that drafted the Texas Evidence Code and Texas Lawyer’s Creed. He was an advocate of the American Board of Trial Advocates and fellow of the American College of Trial Lawyers and International Society of Barristers.