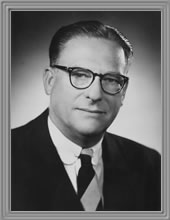 A native of Hubbard, Texas, J. Glenn Turner Sr., was born on October 6, 1905. He attended Austin College and the University of Colorado before entering the Southern Methodist University School of Law. In 1923 he received his LL.B. degree and was admitted to the Texas Bar. Turner first practiced in Delta County where he was county attorney from 1928-1932. In 1933 he moved to Dallas and remained there until his death. Turner was married twice. He was the father of two daughters and three sons, one of whom also became a Dallas attorney. Turner was president of the Dallas Bar in 1939 and a member of the State Bar Board of Directors from 1948-1952, when he was elected president. At various times he was also an advisor to the American Citizenship Committee and chairman of the Federal Judiciary Committee, the Texas Bar Journal Committee, and the Building Finance Committee. During the 1950's he served in the House of Delegates of the American Bar.

As State Bar President, Turner successfully concluded the campaign to raise funds to construct and furnish the new State Bar Building. He extensively used the mass media to improve the relationship between members of the Bar and the public, and he increased the Bar dues in order to combat further those persons still engaged in unauthorized practice of the law. Turner was a director of the Southwestern Legal Foundation and vice president, director, and general counsel of the Texas State Fair. He was a member of the Greater Dallas Planning Council and served on the board of directors of the Dallas Civic Opera Association. He also served as president of the Tennessee Walking Horse Breeders Association of America, as vice president of the U.S. Equestrian Team, and as a director of the American Horse Show Association. He belonged to the Methodist Church and numerous Dallas civic and social clubs. He was a chairman of the Dallas Community Chest and Red Cross. Turner died on May 10, 1975.