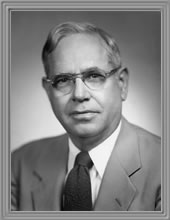 H. Grady Chandler Sr. was born in Plano, Texas, on March 23, 1890. He attended Plano High School and the University of Texas, where he received his B.A. degree in 1912 and his LL.B. degree in 1916. Chandler was valedictorian of his high school class and held a golden diploma from the University of Texas. Following his admission to the Bar in 1916, Chandler did not immediately begin to practice law. Instead, he enlisted in the U.S. Army, and by the end of World War I he had attained the rank of first lieutenant. Returning to Texas in 1919, Chandler was elected county attorney of Collin County. He served in that capacity and then as district attorney until 1926 when he became an assistant Attorney General of Texas. Chandler left the Attorney General's staff in 1933 in order to teach at the University of Texas law school. Later on, he went into private practice as a member of the Austin firm of White, Taylor & Chandler. Most of his cases involved efforts to recover for the permanent school fund vacancy tracts or oil royalties on public school lands. His most important endeavor was the Humble Oil Company case that encompassed 300 acres in Montgomery County. In 1939 it was estimated that Chandler had recovered over a million dollars for the fund and still had 30 additional lawsuits pending.

Chandler was elected President of the State Bar of Texas for the 1947-1948 term. As president, Chandler sponsored reforms in the criminal procedure and successfully pushed for a constitutional amendment providing for the retirement with pay of judicial officers. He also advocated the organization of local Bar associations. Chandler held a 50-year membership certificate from the State Bar. Chandler, who was active in the Kiwanis Club and the Lions Club, married Edith Church Bickley in 1918. They had two sons. Chandler died in Austin on September 1, 1976, having been preceded in death by both his wife and his sons.