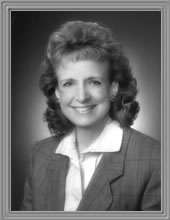 Harriet Miers, the first woman nominated as a president-elect candidate and the first woman elected as president of the State Bar of Texas, is a partner in the Dallas firm of Locke Lord, L.L.P. She earned a B.A. at Southern Methodist University and J.D. from SMU School of Law. Miers is a former director of the State Bar of Texas and was the first woman president of the Dallas Bar Association. She is a former member of the State Bar Litigation Section Council, has also served on the ABA Consortium on Delivery of Legal Services to the Public, and was formerly on the Steering Committee of the ABA Representation of the Homeless Project. She was named DAYL Outstanding Young Lawyer in 1979. She served in the administration of President George W. Bush from 2001 to 2007 as staff secretary, deputy chief of staff, and counsel to the president.

Miers served on the board of editors of the ABA Journal, as a member of the State Bar Delegates Nominations Committee, the Board of Visitors for the SMU Law School and as a Trustee of the Southwestern Legal Foundation. Miers is a sustaining life fellow of the Texas Bar Foundation and American Bar Foundation.

Miers was a founding director of Lomas Mortgage Securities Fund, Inc., a New York Stock Exchange listed company and has served on the executive committee of the Greater Dallas Chamber of Commerce. Miers worked as a youth group advisor, legal counsel, and member of the Missions Committee of Valley View Christian Church.