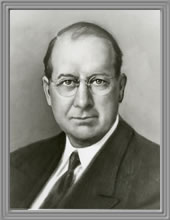 Gordon Simpson was born in Gilmer, Texas, on October 30, 1894. He is the son of District Judge Robert W. and Addie F. Simpson. From 1911-1913 he attended Baylor University, but then he transferred to the University of Texas where he obtained his B.A. degree in 1915 and his LL.B. degree in 1919. He married Grace Jones in 1920, and they had two daughters. Simpson participated in both World Wars, and from 1942-1944 he served as a major in the Judge Advocates Corps. He was awarded the Bronze Star, and in 1948 he headed the U.S. Army's special War Crimes Commission to Germany. Simpson was admitted to the Texas Bar in 1919. He practiced law briefly in Pecos but soon moved to Tyler where he lived until 1942. He was a member of the Texas House of Representatives from 1923-1927 and served as judge of the 7th Judicial District in 1930. While in Italy with the U.S. Armed Forces in 1944, Simpson was elected associate justice of the Supreme Court of Texas. He began his term on the Supreme Court in 1945 and served until March 1949 when he became the general counsel for the General American Oil Company of Texas.

Simpson is a past president of the Smith County Bar Association. He was chairman of the Board of Directors of the State Bar of Texas in 1940-1941 and president in 1941-1942, during which time the Bar sponsored a meeting of Texas district judges to study the newly promulgated Rules of Civil Procedure. This meeting became a forerunner of future annual meetings of district and appellate judges. As president, Simpson made 42 speeches to local Bar associations around Texas, discussing the mission of the newly organized State Bar. Simpson was a member of the American Bar, Judge Advocates Association (for which he was president in 1955-1956), American Judicature Society, and American Law Institute. He belonged to the Presbyterian Church, Democratic Party, Phi Alpha Delta fraternity, Scottish Rite, Elks, American Legion, and the Officers' Reserve Corps in which he held the rank of colonel. Simpson died on February 13, 1987.