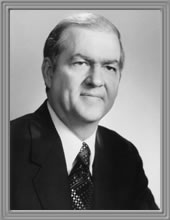 Gibson Gayle Jr. was born in Waco, Texas, in 1926, the son of Gibson Sr. and Elsie Little Gayle. In 1950, he received his A.B. degree and LL.B. degree cum laude from Baylor University. As a student, he was president of the Baylor Chamber of Commerce, a member of the Honor Council, editor of the Baylor Law Review, a law school quizmaster, and recipient of the Allen G. Flowers Scholarship. He was selected to "Who's Who In American Colleges & Universities" and ranked first scholastically in his law class. Gayle was admitted to the Texas Bar in 1950 and scored the highest on that year's Bar Exam.

Gayle entered the U.S. Army as a private in 1945 and attained the rank of second lieutenant by 1947 when he went into the Army Reserve. He was honorably discharged as a captain in 1950. Gayle married Martha Jane Wood in 1948 and had two sons and three daughters.

Gayle began practicing in Houston in 1950 and was a partner with the firm of Fulbright & Jaworski. He was president of the State Junior Bar in 1954-1955, a member of the State Bar Board of Directors in 1966-1969, and State Bar vice-president in 1974-1975 before becoming State Bar President in 1976-1977. Gayle also served as chairman of the board of directors of the Texas Bar Foundation and chairman of the A.B.A.'s Young Lawyers Section. He was a life member of the House of Delegates and a fellow of the Texas and American Bar Foundations.

As State Bar President, Gayle helped to maintain a unified bar free from legislative control of bar funds. During his tenure, the bar acquired videotape and other Continuing Legal Education equipment to permit traveling legal institutes, and there was the virtual completion of work to form a reciprocal insurance exchange to write professional liability insurance for Texas lawyers. Gayle was a Christian Scientist and a Democrat. He was a trustee of the Baylor College of Medicine and from 1957 to 1976, he was on the board of governors of the Harris County Center for the Retarded (the Center Serving Persons with Mental Retardation).