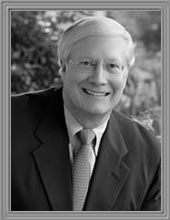 Gib Walton was a partner in Hogan Lovells, L.L.P. in Houston. He formerly was a partner in Vinson & Elkins, L.L.P. and served 10 years on the management committee. He served as president of the Houston Bar Association in 1998 and chaired the Houston Bar Foundation and Houston Volunteer Lawyers. He served on the State Bar Board of Directors and Executive Committee, chaired the Finance Committee, and successfully led the Bar through Sunset Review during the 2003 legislative session. The State Bar recognized Walton with its Presidents’ Award, Judge Sam Williams Leadership Award, and Michael J. Crowley Award for extraordinary commitment and leadership.

Walton’s initiatives as State Bar president included public education, building diversity in the profession, emphasizing the importance of helping lawyers with depression and mental health issues, and increasing support for legal services to the poor. Walton was an ardent supporter of access to justice issues, having served on the board of directors of the Texas Access to Justice Foundation from 2000 to 2006. He was also a past chair of the Texas Bar Foundation.

As a member of the Pro Bono College, Walton also served on the boards of Methodist Hospital, Brookwood Community, and South Texas College of Law. A 1972 graduate of the University of Virginia, he earned his J.D. in 1975 from the University of Texas School of Law, where he was a Texas Law Review editor. He was certified in civil trial law by the Texas Board of Legal Specialization.

Walton was an elected member of the American Board of Trial Advocates, the Garland Walker American Inn of Court, and the International Society of Barristers.