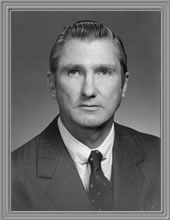 Franklin Jones, Jr., of Marshall was a partner in the law firm of Jones, Jones & Baldwin, served as State Bar vice-president in 1970-71. For three years prior to that, he served on the State Bar Board of Directors. Jones' major focus in Bar activities was prepaid legal services. He was chairman of the State Bar Committee on Prepaid and Group Legal Services from 1971 until 1977, served as president and chairman of the board of directors of the Texas Legal Protection Plan (TLPP).

Jones also served on the State Bar Committee on Administration of Justice (1971-1974), the Committee on Legal Specialization (1973), and the Texas Board of Legal Specialization (1974-1975). He is also a past president of the Harrison County and Northeast Texas Bar Associations. In 1976, Jones was one of two attorneys honored with the Award of Achievement by a committee of past Bar presidents. Jones was board certified in civil trial law and personal injury trial law by the Texas Board of Legal Specialization. He was honored as a Fellow of the Texas Bar Foundation, International Academy of Trial Lawyers, and American College of Trial Lawyers. A native of Marshall, Jones obtained his B.A. and LL.B. degrees from the University of Texas at Austin in 1952 and 1954, respectively. He was admitted to the Texas Bar in 1953. Jones married the former Elizabeth Francisco of Houston. They had a son and a daughter. Jones died on December 18, 2008.