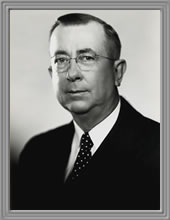 Few Brewster was born in Williamson County, Texas on May 10, 1889. After finishing at Killeen High School, he attended Baylor University and Howard Payne College, where he was later awarded an LL.D. degree. Brewster then transferred to the University of Texas, and there he became a quiz-master and belonged to the Order of Chancellors while in the law department. Following his B.A. at Texas in 1913, he completed work for his LL.M. in 1916 with a thesis entitled "Trespass to Try Title in Texas." Later in life Brewster was initiated into the Phi Delta Phi fraternity. Except for his years of service in World War I as a second lieutenant in the infantry, Brewster practiced law in Temple from 1916-1929 in the firm of Bowmer & Brewster with the late DeWitt Bowmer, father of Jim D. Bowmer, the 92nd State Bar President. After the war he remained active in the American Legion. In 1918 he married Myra Kilpatrick, and they had three children.

Brewster served as Bell County attorney from 1919-1923 and district attorney from 1923-1928. On January 1, 1929, he became district judge for the 27th District. After several terms he resigned in November 1941 to accept an appointment to the Texas Supreme Court's Commission of Appeals. When the Supreme Court was enlarged to nine members in 1945, Brewster became an associate justice. He was elected and re-elected to the court in 1948 and 1954. Brewster resigned from the Supreme Court on September 30, 1957, because of ill health. He died at his home in Austin on October 12 of that year.

Brewster served as president of the Bell County Bar Association, during which time he became the head of the Judicial Section of the Texas Bar Association for 1937-1938. He was secretary of the Texas Bar in 1938-1939 and vice-president in 1939-1940. In April 1940 he became the first vice-president of the new State Bar of Texas and served as its president in 1940-1941. As president, Brewster had the difficult job of selling the organization to a large number of lawyers who regarded the newly integrated Bar as "regimentation" of their profession.