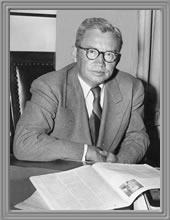 Everett L. Looney kept the State Bar of Texas on course by continuing the well rounded programs of his predecessors. As 73rd President of the Bar during the years 1953-1954, Looney created the office of General Counsel; but most importantly, it was during his term that the State Bar Building in Austin was completed and fully paid for. The son of Robert H. and Myrtle M.H. Looney, Everett Looney was born in Ennis, Texas, on November 30, 1900. He attended the University of Texas law school. He graduated and was admitted to the Bar in 1922 and began his practice of the law in Ennis where he served as city attorney from 1923-30. Looney married Mary Riley in 1923, and they had one son and one daughter.

In 1931 Looney moved to Austin to become an assistant Attorney General under James V. Allred. Then in 1932-1933 he practiced law in Houston for 18 months while continuing to serve as a special assistant to Attorney General Allred. He returned to Austin in October 1933 and practiced there until 1958 when he suffered a stroke and was forced to retire. Looney was appointed chairman of the Texas Industrial Commission in 1935 and served for 3 years, after which he was appointed to be a special assistant to U.S. Attorney General Francis Biddle during 1938-1939.

Besides being President of the State Bar, Looney also served as vice-president in 1952-1953, as a director from the l0th District from 1949-52, and as chairman of the Building Committee in 1952-1953. He was a member of the Travis County and American Bar Associations and was a Fellow of the American College of Trial Lawyers. Looney also belonged to the Central Christian Church. He was a 32° Mason in the Ben Hur Temple of the Austin Scottish Rite Bodies. Everett L. Looney died in an Austin hospital on October 4, 1962. Following his death, his law firm contributed a $6000 student-loan memorial in his honor to the University of Texas Law School Foundation.