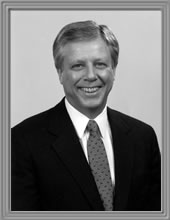 Darrell E. Jordan was senior counsel and the office managing member for the Dallas office of Dykema. A native of McAllen, he earned a B.A. from the University of Texas and an LL.B. from Southern Methodist University School of Law in 1964. Jordan served on the State Bar Board of Directors from 1983 to 1986. He was a member of the Executive Committee in 1985-86. Jordan served as chairman of the Fact Finding Committee of the State Bar in 1985-86, and of the Grant Review, Development, and Implementation Committee from 1984 to 1986. He also served on the District 6 Grievance Committee and District 6 Grievance Prosecuting Committee.

Jordan was a fellow of the Texas Bar Foundation and served as liaison to the Board of Trustees from the State Bar Board of Directors in 1985-86. He served as a member of the Texas Trial Lawyers Association and was board certified in civil trial law by the Texas Board of Legal Specialization. He was also a fellow of the American Bar Foundation. Jordan served on the board of directors of the Dallas County Chapter of the American Red Cross. He was a former trustee of the Dallas Foundation and a former research fellow of the Southwestern Legal Foundation (now the Center for American and International Law). Jordan was a member of the Salesmanship Club of Dallas. Jordan served as chair of the Committee for a Qualified Judiciary from 1993 to 1997. He was chair of the Nominating Committee of the Committee for a Qualified Judiciary and was a member of the Advisory Committee of Dallas Mexican American Legal Defense and Educational Fund Leadership Program.

Jordan served as chairman of the Attorneys Division, United Way of Dallas in 1977-78. He was a member of Highland Park United Methodist Church.