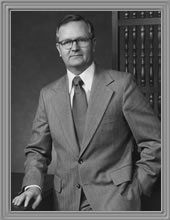 Cullen Smith, Jr., was born in Waco in 1925. After first practicing law in Welasco, Texas, in 1950-53, he moved to Waco and was a member of the law firm of Naman, Howell, Smith, Lee & Muldrow. In 1948 he married Laura "Mickey" Dossett. They had three daughters, one of whom, Risher Smith Gilbert, became an El Paso attorney. Smith attended Baylor University. He received his B.B.A. degree in 1948 and his J.D. in 1950. During 1964-1973 he served as a lecturer at the Baylor law school and was the 1980 Baylor Lawyer of the Year. He was a member of Phi Delta Phi and an honorary member of the Texas Tech Order of the Coif. During 1943-46, Smith served as a first lieutenant in the Marine Corps.