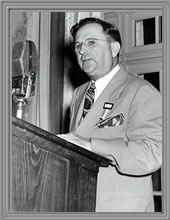 Claude E. Carter was born on April 18, 1897, at Robert Lee, Texas. He received his higher education at North Texas State Normal College and the University of Texas. In 1917 he joined the U.S. Army, but during the course of World War I he transferred to the Air Corps as a flying cadet. In 1918 he was commissioned as a first lieutenant. Upon his discharge from the service, Carter flew as a barnstormer throughout the United States, Central America, and the Caribbean. He performed stunt flying and wingwalking and survived several crashes in which his aircraft were totally demolished. He married Dannie Adams in March 1923. They had a natural daughter and a foster son.

Carter was admitted to the Texas Bar in 1922 and began his practice of law in Harlingen where he remained throughout his life. He was elected State Representative in 1927 and served one term in the Legislature. In 1924 he was joined by Lloyd E. Stiernburg, another former State Representative; and the pair established the well known firm of Carter & Stiernburg. Carter was the assistant district attorney for Cameron County from 1932-1936. Early in his legal career, Carter was elected president of the Harlingen Bar Association. He was never asked to relinquish this office and thus, in effect, became president for life of the Harlingen attorneys. After serving as a director of the State Bar of Texas in 1940-1941, Carter was chosen vice-president in 1941 and president in 1942. Accused by his critics of ''prostituting the office of presidency," Carter nevertheless used his position and the Bar Journal to advocate judicial retirement pay, a nine-jury verdict in civil cases, and adoption of the federal rule in the submission of jury charges.

Carter, who belonged to the American Legion and the 40 & 8 Club, was to have been recognized at South Texas' AIRSHO 77, along with Lloyd M. Bentsen, Sr., of Mission, as one of the two surviving World War I pilots in the Rio Grande Valley; but his untimely death on October 4, 1977, prevented him from receiving this honor.