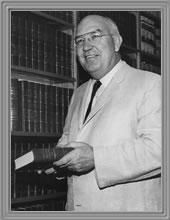 Clint Small, Jr., was born in Wellington, Texas, on November 13, 1914. He attended Amarillo Junior College before transferring to the University of Texas at Austin, where in 1939 he received both his B.B.A. degree with honors and his LL.B. degree with highest honors. As a law student, he was a member of the Chancellors, Order of the Coif, Texas Law Review staff, Beta Gamma Sigma, and Pi Sigma Alpha. In 1936 he was captain of the Texas Longhorn football team. Small was admitted to the Bar in 1939; and after practicing briefly in Amarillo, he moved to Austin where he worked for two years as an attorney in the Texas General Land Office. In 1942 he entered private practice in an Austin law firm with his father C. C. Small, Sr., a former State Senator.

Small continued to practice in Austin. He married Annie Laurie Jaeggli in 1936, and they had two daughters and one son, attorney Edward C. Small of Austin. A former director and president of the Travis County Bar Association, Small served on several State Bar committees, including the Legislative Committee. He was on the State Bar Board of Directors for a number of years before becoming president in 1965. As the eighty-fifth President of the Texas Bar, Small was able to reactivate the Texas Bar Foundation program and finally put it into operation. The Bar dues were raised once again during Small's term, and a Bar redistricting plan increased the Board of Directors membership for the larger metropolitan areas where lawyer concentration is higher.

In addition to his State Bar work, Small also served in the American Bar's House of Delegates during 1966-1968. He was a Fellow of the Texas and American Bar Foundations. His service also included terms as president of the board of trustees of the Austin Independent School District and on the board of directors of the Austin Savings and Loan Association. Small died on August 22, 1997.