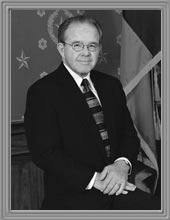 Charles F. “Charlie” Aycock was a solo practitioner in Amarillo. Prior to that, he was a partner in the firm of Aldridge, Harding & Aycock in Farwell. Aycock was a general practitioner licensed to practice law in 1967. He served as Parmer County Attorney for more than 23 years. He earned a BBA from Texas Tech University in 1963 and then worked for the late Congressman George Mahon in Washington, D.C. Aycock graduated from the University of Texas School of Law in 1967 and from 1967 to 1969 worked for the Texas Attorney General’s Office. He served on the District 13 Grievance Committee and was a member of the State Bar Board of Directors from 1990 to 1993. Aycock was a past chair and life fellow of the Texas Bar Foundation. He was appointed by Gov. Rick Perry to the Texas Board of Pardons and Paroles in 2004 and served until 2011.